You know what? Today has kinda sucked.

Went to pick up Michael at the movie theatre and the car died. WHAT a right pain in the ass. Rumour has it that it might be the starter. Cost me $100 to have the damned thing towed to my garage here in Pincourt (had the dog along too. *sigh*). God knows what the repairs are gonna be once they get a chance to look at it. I really don't need this crap. *SIGH*  Whatever get-up-and-go I had has gotten up and gone.

One good thing though, a nice lady gave Michael, Squirt and me a lift home when the taxi we called never showed up.  Oh, and Michael quite enjoyed his movie.  *LOL*

Posted by Evaine at 6:26 pm No comments:

Email ThisBlogThis!Share to TwitterShare to FacebookShare to Pinterest
Labels: Stuff, You know what? 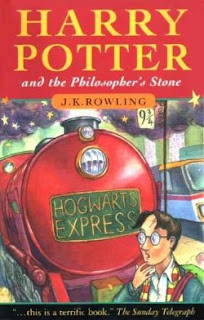 It's a big deal today, all over social media and the blogosphere.  Harry Potter turns 20.

I've never been a Harry Potter fan.  I made it part way through book 3, I think, and that was that.  And while I have also watched most of the movies - I think - I'd be hard pressed to tell you much about them aside from who played who in them.

That being said, I give HUGE kudos and congratulations to J. K. Rowling and her books of Potterdom.  They inspired a massive amount of children, and adults, to pick up a book and start to read.  So many kids that never wanted to read before, read that first Harry Potter tale and were hooked.  And remained hooked!

That is worth everything.  :)

The Women of One Chicago

I'm watching this week's Chicago PD finale and I've had a bit of a realisation.  I don't like any of the female leads in the Chicago triumvirate of Fire, PD and Med.  That'd be Gaby, Erin and Natalie.  I find them all rather spoiled, rather entitled, rather pouty and very much annoying.  I love  all the other female characters in the shows, but those three really irritate me.

Now I wonder why that is.  What is it about the way these three shows are written that makes me find those characters unsympathetic?  I have no clue.  But at least it doesn't stop me from watching the shows - in fact, I love ALL the Chicago shows, Justice too.  I wonder why the female leads on that show don't bug me?

Email ThisBlogThis!Share to TwitterShare to FacebookShare to Pinterest
Labels: Musings, TV, You know what?

Thinking About DWTS and Pimping

So I was pondering things tonight, after that elimination on DWTS.  I wandered over to the blog from hell to see what 'the numbers' had decreed would happen (ie, how many more votes David needed over Simone to be staying) and lo' and behold, half the post was about a dancer who is no longer on the show.  Anyway, it got me to thinking about pro-pimping and eyes on the screen and production's mandate.  I also wonder how many votes in total get cast every week - that's the most closely-held secret in DWTSLandia, I think.

So it's a TV show.  Always remember it's a TV show (thank you Shirley Ballas).  The main goal of the TV show is to get eyes on the screen.  What eyes?  The coveted 18-49 demographic to be precise.  That's how the show makes money and that's how they stay on the air.  Getting those advertisers who want those viewers.

Okay, so... over the years, DWTS has become a great deal about following the pros.  I think the majority of the regular viewership has their favourites and continue to tune in, in large part, to see them.  And I think alot of that viewership is women between the ages of 25 - 55.  So, they're going to have their favourites that they're going to root for, no matter who the celeb is.  And some of them actually have as their favourites, some of the female pros and some of the married ones.  But I don't think those viewers are a huge majority.  Quite the contrary.

But the network wants more of those new eyes on their screen, so they figure that one way to do it is to have a star pro or two who would bring in the coveted eyes.  In the past we've had Hough and Mark and Maks all at once or a couple at a time.  But this season is different.  Hough has moved on (thank God!) and Mark has as well, but I can actually see him coming back for a season if the partner and the $$ are right - and even then, he's a married man now, so would he attract a bunch of new eyes?  I'm doubtful.  And Maks... well, Maks has moved on and he hasn't.  But my point is... where is the hunky single fellow that the young ladies can swoon over?  Gleb?  Married, wife pregnant with 2nd child and he's icky - okay, so that's my opinion, but I've seen it shared in a lot of places.  Sasha?  He's adorable but he's quirky and he's engaged to the lovely Emma.  Artem?  I don't think the young ladies have the taste to appreciate his uniqueness.  *LOL*  And I'm back to Maks who is head over heels for Peta and a new father and not likely to bring in a ton of young eyes.  So who do we have?  Who's still 'available'?  We're left with the Little One.  Val.  He's going to be the pro that production is going to do their best for, I think, as the one with the greatest chance of bringing in the young eyes.  Of course, if they bring Alan on board next season, he could get some competition.

And the ladies suffer from somewhat the same problem.  I suspect most of the viewership is female and in reality, therefore, not really likely to be fanatical about them.  Even if they are extremely talented and terrific.

So production sees the votes every week.  They know who's pulling in the votes and they're not dumb, not really, they have a decent handle on the whys and wherefores.  I think they have a good idea of how much of the vote is for the pro and how much for the celeb.  They've been on top for a long time and it's not luck.

In the end though, I don't think that Simone got sent home because Normani was being pimped to promote Val. I think Normani is a pretty good dancer and is quite the crowd pleaser on her own.  I think the judges being so harsh on Simone for so long poisoned a lot of the casual vote that she would have received.  I also think that she isn't as DWTS crowd-friendly as Laurie was last season.  Laurie just sparkled all over the place, but Simone is more quiet and demure - I honestly think she might be a true introvert.  That being said, yes, I think they are 'highlighting' Val somewhat as the pro draw, but that's the business.  He's the one most likely to bring in and keep viewers in the desired demographic. I don't like it, but it is what it is.

So that's what I think about the pro-pimping and the producer's so-called agenda.  In the end, it's a TV show produced to make money for the network.  And now I'm going to bed.  *LOL*

Posted by Evaine at 1:46 am No comments:

Email ThisBlogThis!Share to TwitterShare to FacebookShare to Pinterest
Labels: DWTS, Ponderations, You know what?

Follow my blog with Bloglovin
Posted by Evaine at 8:46 pm No comments:

Today I continued with the task of curating my browser bookmarks.  I hadn't done it in ... oh... I got this computer about 5 years ago and even then, I imported bookmarks from my old computer, so it's been a while.  Believe it or not, there are a lot of dead links!  *LOL*

I've taken care of a lot of them, but I have a folder left to do that holds all kinds of links to writing essays and tip sheets and author advice and all kinds of stuff I've accumulated over the years.  There are a lot of links in that folder.

So that was my day's excitement.  Thrilling huh?  :)

(x-posted to Dreamwidth)
Posted by Evaine at 11:45 pm No comments:

Email ThisBlogThis!Share to TwitterShare to FacebookShare to Pinterest
Labels: Sully

I stopped watching Game of Thrones back in the beginning of Season 2.  I don't rightly know why, I just did.  I am up to date on A Song of Ice and Fire, having read through A Dance of Dragons, however.  Last night was the premiere of Season 6 of GoT on HBO and it was all over my Twitter timeline and Facebook, so much so that I actually dreamt about it, the TV return, that is - Jon Snow hadn't died, he'd gone off to be a pirate and returned to Westeros at the head of a pirate fleet.

So as I lay in bed this morning, I ended up wondering if George R.R. Martin ever regrets selling the series to HBO when he did.  Now that the show has apparently caught up with the books, and it's been officially announced and reiterated that what is seen in the show will not be following the books in many cases - many more cases than it already has - it sets me to wondering.

I know that GRRM has shared his vision of the story with the producers of the show, but God knows if they're all going to end up in the same place now.  I wonder how that feels, to have one's arguably best piece of work taken from your hands and reformed before you even get the chance to do it your way.  The first time.  The original.   I think he must at some point, no?  Have regrets?  In the wee small hours?  Do all the $$ and recognition he's received thanks to the TV show make up for it?  Again, when he's all alone in the wee small hours, I wonder....

I also wonder if A Song of Ice and Fire, his story,  will be tainted by Game of Thrones and what the TV producers come up with as their story.  Does the original vision of Westeros become something shared between GRRM, David Benioff and DB Weiss instead of GRRM's alone?

That was all some heavy thinking before my first cup of coffee!

Posted by Evaine at 6:30 pm No comments:

Evaine
“Think left and think right and think low and think high. Oh, the thinks you can think up if only you try!” ..... Dr. Seuss